Sing your favorite pirate song out loud! If you don’t know any pirate sea shanties, make one up. We have reason to celebrate: Ubisoft’s Skull and Bones launches November 8 and looks pretty good. News of the game’s resurrection (after a long delay) arrived today in a 20-minute Ubisoft Forward live stream that included a brief look at some stunning new gameplay footage.

“Will you live like pawns or die like pirates?” This post kicked off the presentation which included a CGI trailer highlighting intense sea battles and a pirate’s infamy growing over time. Vanessa Sow, producer at Ubisoft Singapore, says Skull and Bones has evolved since its debut in 2017.

“Forget everything you know about traditional pirate fantasy, Skull and Bones takes a darker, grittier approach with our new gameplay direction,” she said. “We wanted to reinvent what pirates really were, drawing inspiration from the Indian Ocean during the golden age of piracy. You start as a survivor of a shipwreck, stranded in an unknown place, mysterious and exotic. This is a world where everything and everyone wants you dead. You will face many dangers: from vicious hippos and crocodiles to violent storms, pirate hunters, powerful corporations and even the mutiny of your own crew.

Designed as a pirate experience on the high seas, Skull and Bones begins on a small scale with the player pirating a small ship called the Dhow. You are equipped with a basic spear to repel hungry wildlife when you board. In these early stages of the game, you collect items and complete contracts for other pirates you befriend. The more you work, the higher your infamy level, which unlocks new blueprints and designs for ships, weapons, and armor.

Ubisoft game director Ryan Barnard says naval combat is still the core Skull and Bones experience. “We want it to be visceral, fast-paced, rewarding, and part of what we do is give players a wide variety of weapon choices, which you unlock through Infamy,” he said. “You’ve seen cannons, for example, but we also have Greek fire, explosive mortars, and bombards that you can launch at enemy player decks.” As you make a name for yourself on the high seas, your infamy reaches new ears, bringing additional missions and better rewards.

The first images of this revamped Skull and Bones game draw attention to elaborate ship designs and small islands with so much detail in the foliage, mountainous rocks and heavily guarded fortresses. We also see a pirate lair called Sainte-Anne, where you can roam free, talk to vendors to craft new gear, buy supplies for your next expedition, make new contracts, and socialize with other players. In one clip, we see a player dancing, a moment screaming Fortnite, and potential purchases. 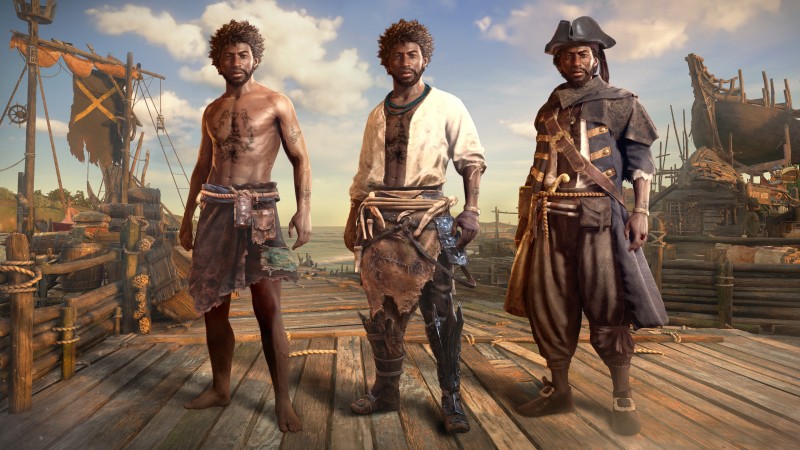 The naval battles feel like the ones we remember, drawing heavily on the excellent naval warfare of Assassin’s Creed: Black Flag. As the ships roar over the waves, cannon fire collides with wood, creating an explosion of debris and collapsing sails. We learn that if your ship sinks, you respawn in the nearest den or outpost and may lose some of your progress. Most of your cargo recovers automatically, and you can travel to your wreckage to collect the rest. Chances are you won’t find anything there, as other players may grab it first.

We see more sections on foot, showing the player’s pirate holding a compass on an island and later digging up a treasure chest. Contracts and Exploration are playable solo and cooperatively. If you want to compete against other players, you can join PvP servers.

Sink ships is one way to get supplies, but you can also pull your ship close to shore to harvest wood from trees, rocks, etc. In muster mode you will want to bring a freighter as it can carry more but beware of other pirates as this ship is slower than the others. Sailing ships sail faster, but have less HP and cargo space. If you want to fight against rival NPC-controlled pirates, you’ll want to command the Firepower ship, which has more cannons but is harder to maneuver. All of the ships featured are very different in design, giving us an overview of the customization options.

We don’t know how big the open world is, but the game’s trailer says we’ll be able to explore the Indian Ocean coast in Africa and the East Indies. You will need to watch the skies, as the weather can affect your navigation. You could experience violent storms or huge rogue waves. You might also encounter dynamic events that require the help of other players, such as taking on a royal fleet and its merchant ships.

After the game launches in November, Ubisoft says players can expect a steady stream of content spanning many years.

I liked what I saw of Skull and Bones returning in this presentation. While it’s not the spiritual successor to Black Flag that I was hoping Ubisoft would make, the depth of customization feels fantastic, and I like the idea of ​​starting with nothing and working your way up to a fleet. It’s a hell of a carrot to dangle in front of the player and I can’t wait.